Dirk Maserkopf, financial analyst at Racing and Wagering Western Australia (RWWA), said he has fallen in love with his two adopted greyhounds.

He spoke to RWWA’s Julio Santarelli about the breed and what makes them such wonderful companions and pets.

JS: What inspired you and your partner choose a greyhound as a pet?

DM: We were looking for a dog and working at RWWA came across the Greyhounds as Pets (GAP). Tara at GAP lined us up with Diamond who we fell instantly in love with.  It worked out really well and 18-months later we adopted her half-sister, Lulu.

JS: You have owned cats in the past, but have you ever had a dog previously?

DM: My dad had German Shepherds so I was always interested in getting a dog at some stage, but never a greyhound to be honest. But once we were introduced to the GAP program at a trade show we fell in love with them as a pet.

JS: What was your initial thoughts and impressions of greyhounds?

DM: I thought they were high maintenance dogs, hyperactive that needed a lot of exercise, but that was all wrong.  We were just so surprised how laid back and lazy the dogs are and how easy they are to maintain and look after. 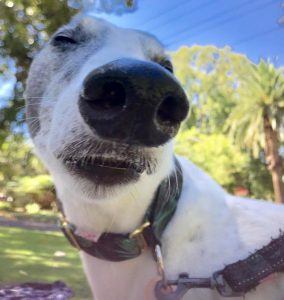 DM: Yes. They were the exact opposite to what I thought.

JS: Do you have a large house and space for them?

DM: We have a small cottage block with not much garden, but the house itself is big enough.  The dogs are inside throughout the day, but on weekends we leave the doors open so they can roam throughout. They sleep from 7.30 in the morning to about 4 in the afternoon when we get home.

JS: How did Diamond adjust to the second greyhound?

DM: Initially we were supposed to foster Lulu, but Diamond fell in love with her immediately and they bonded.  We adopted her about a day or so later.

JS: What is the best characteristic of the greyhounds?

DM: Very laid back, very loyal, very affectionate, love being around people. They follow you everywhere and are your shadow.

JS: What do your friends say when they visit and are confronted by two greyhounds?

DM: Surprise at first, mainly because of the negative perception of greyhounds.  But they’re everybody’s friend now.JS: What do your friends say when they visit and are confronted by two greyhounds?

DM: Very Good.  We have our niece and nephew who sometimes stay over with us and they get along super. They play with each other, cuddle each other, so there is no drama, they are kids friendly.

JS: Any negatives with the greyhounds? DM: Initially there were some people who were hesitant to touch or approach them, but they are now green collared and don’t have to wear a muzzle, which is a great help because with them on there was a perception they were aggressive looking-particularly to children.

JS: Is there a change of perception in the community?

DM: It’s changing. People seem to know a lot more about them compared to two or three years ago.  I think social media has helped a lot.

JS: Can they adapt to a new environment easily?

JS: If anyone is contemplating adopting a greyhound you would recommend it?

DM: Absolutely.  It’s definitely worth it.